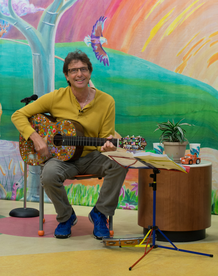 Photo courtesy of Luke Adams.
Singer, songwriter and children's entertainer, Joel Frankel, has been captivating listeners of all ages with his engaging original songs for nearly two decades. By combining his musical talents with his background in education, Joel presents an energized, creative performance that is stimulating for kids and appreciated by adults.

Joel's four children's albums have received numerous awards, including his most recent album, "Ship of Chocolate Chips," which received the Parent’s Choice Award. Joel’s songs are heard on FM, AM and satellite radio stations around the world and have been featured on The Learning Channel, MTV and NBC. "We Go Together," which remains one of Joel's most beloved songs, was featured in Big, the classic motion picture starring Tom Hanks.

Prior to writing children's songs, Joel lived in Los Angeles and worked with legendary songwriter, Barry Mann, renowned producer, Steve Tyrell, and played in the rock band Down Boy Down with Eddie Ganet. Joel even made a cameo appearance as an accordionist in Father of the Bride, starring Steve Martin and Diane Keaton.

Currently, Joel lives in Chicago with his wife and kids, who often play with him. He is a faculty member at the Old Town School of Folk Music and regularly plays shows in Chicago and across the country. More about Joel....